So this year I did a food sensitivity test. I had been feeling not 100% but not feeling like it was anything medical and knew certain foods made me feel worse. But couldn’t pin down which ingredient in those foods was the culprit. So I decided to get the food sensitivity test to start with my search on what was bothering me. I just felt bloated, sluggish and crummy all the time. Nothing life shattering but just uncomfortable. Once in a while I’d have a bout of racing to the bathroom after eating but chalked that up to poor handling of restaurant food since we ate out a lot.

The issue with eating out so much is that you just don’t know what’s in the food. So many things are hidden in the foods in restaurants that it’s almost impossible to eat out if you have food sensitivities or allergies. Now I know there is a big difference, and for those of you that don’t know the difference between allergies and sensitivities here’s the easiest explanation. With a food allergy the reaction is typically immediate and can be anything from hives, to not being able to breathe, it’s super serious and even a little bit of an allergen can be life threatening. Food sensitivities are slower to progress they come about in 12-72 hours after the food is consumed so it makes it hard to pinpoint something unless you have a sensitivity test done to at least point you in the right direction. With sensitivities the reaction can be anything from nausea, headaches, insomnia, stomach cramping, diarrhea, bloating, gas, etc. While it’s not life threatening it’s not fun to feel like that all the time. So I decided to have a food sensitivity test done which is an IgG test. This tested 204 foods to see how my immunity reacted to them. It’s a blood test that you can do at home.

I got the Everlywell Comprehensive Test which tests 204 foods. They have the list of the foods that they test on the site. I wanted to be sure that my test was as accurate as it could be so I printed out the list and before actually doing the test I took 30 days and ate as much of the foods on the list as I could that were things I would eat but might not eat often or might not have had for a long time. They say that if you haven’t had it in 30 days it might not register on your test. Then I did the blood test. You get a card with 10 circles on it and 3 finger pricking devices. Let me tell you that I had to have my husband do the finger pricking because I couldn’t bring myself to intentionally stab my own finger. And no lie, it smarts and your finger will be sore for a day. So they say to prick it on the side of your finger so you aren’t constantly hitting it on something while it heals. My problem was that I am a great coagulator. So by the time I did 3 circles my finger had stopped the flow of blood and I had to prick another finger to finish the card. So I had one on each hand :-( Not optimal but it wasn’t the end of the world. I got all of the circles filled in and sent off my card. It was only a few days after they sent me an email that they had received the card that I got my results. Now I know why I was feeling bad all the time. I had 0 Severe sensitivities, 2 moderate sensitivities and 23 mild sensitivities. They say the mild ones are the ones that can cause the most issues because they can compound over the course of your day. Here’s my list of sensitivities.

I have 2 “moderate” reactivity foods.

I have 23 “mild” reactivity foods.

Now this list isn’t fun for a foodie like me. Eliminating some of these foods is hard enough. Eliminating all of them is even harder. But to really test my system I did a 30 day elimination diet where I cut out all of them at once. Then I can reintroduce them one at a time to see how I react.

I’ve only tested a few on my list so far because once I have a food I have to have clean food to eat for the next 3 days. By clean food I mean only food I’ve prepared myself so I’m sure that it doesn’t have anything else in it that I might react to. And that’s not easy.

So far I know Wheat is a big no no for me. It makes me very sick for 3 days and is so severe that if I have French fries that are cooked in the same oil with other breaded items that I will get the wheat reaction that night. So when going out I have to be careful to make sure that nothing else on their menu is breaded if I order the French fries. Five Guys Burgers is okay as they don’t sell anything breaded in their restaurant. But anywhere else fries are a no no. Did you know that they hide wheat in all sorts of things. Like why is there wheat in soy sauce, they make tamari which is wheat free soy sauce so apparently it’s not needed. But I found out that they add wheat to foods because wheat turns off your “I’m full” reaction. So if there is wheat in it you eat more of it because you don’t feel full. Sneaky huh! So it’s not the wheat that makes you gain weight, it’s the fact that you eat more of everything when you eat wheat. That’s why when you have a bowl of pasta you eat a huge bowl then 20 minutes later you are so stuffed you can’t stand it. It takes a little while for the wheat block to wear off then you are aware of how full you actually are.

Chicken I can have maybe once a week, as long as I don’t have it with any other food on my list. But if I have it more often then that the stomach aches and gas start quickly.

Natural Vanilla gives me bad headaches, break outs and insomnia horribly. Even just the amount that’s in a cookie will do it. I can have imitation vanilla though which is called Vanillin on most labels. But be aware natural vanilla is hidden a lot of times in the term “natural flavor” since it’s not one of the top allergens they don’t have to label it on packages. To find out for sure you have to contact the companies and ask them directly. Or for me I can try the specific food and see if I react. For instance my favorite soda is Root Beer. On the package it lists “natural flavors” but since every root beer brand is different asking one company doesn’t really help know for sure if you are okay. So I tried my usual brand and sure enough the headache started about 4 hours later and I was up all night wide awake. Root beer is caffeine free so that’s not the reason. So I know I cannot have my brand of Root Beer without consequences.

In my recent food truncated life I’m finding how hard it is to eat out if you have these issues. I cannot imagine those dealing with allergies where it’s life threatening, going out must be so stressful. So my idea was to do a blog about my new food life. Maybe something I find out will help someone or maybe some of my recipes might be useful to someone with one or more of the same foods I’ve removed from my diet. All of my recipes will not have the 25 foods that I cannot eat. Some of those might overlap yours or your child’s limitations. I hope you find this blog useful.

You might notice that my recipes are not necessarily diet food. Since I had to cut out so many items I don’t restrict what I eat calorie-wise. And I’m on a 16:8 fasting diet that I’ve been on for about 4 years meaning I eat all of my food in 8 hours a day from noon until 8pm and then fast from 8 pm until noon the next day. My BMI is normal for my height so some of the stuff I eat might seem un-diet. My biggest thing is portion size. I try to eat good flavorful foods but in lower quantity. I eat enough to feel full and if I need a snack later I have nuts or fruits or veggies to snack on. Or the occasional chip. I’m not vegan, plant based or any other moniker. I try to limit my meats to a couple of times a week so that I don’t feel deprived but don’t over indulge. I’m 5’-10” and 159 pounds. I could lose 10 pounds but it’s not a goal really. So this blog isn’t about losing weight, or changing to any particular diet style. It’s just the foods I’ve found or made that I can still eat without sending my body into some tizzy about what I’ve just fed it. I think I’m more healthy than not. But it’s really just about being able to still enjoy food while cutting out a lot of major items that are in every day meals.

So here's my first recipe to share. I usually make a risotto that has a chicken stock base but since I am not eating chicken I decided to try something else. I've never made risotto using tomato juice as the liquid but it turned out pretty darned good.

All of my recipes won't be this involved. But this one is worth the time.

A great seafood recipe for those with sensitivities or allergies to wheat, chicken, dairy, tree nuts, peanuts, fin fish, soy and eggs. 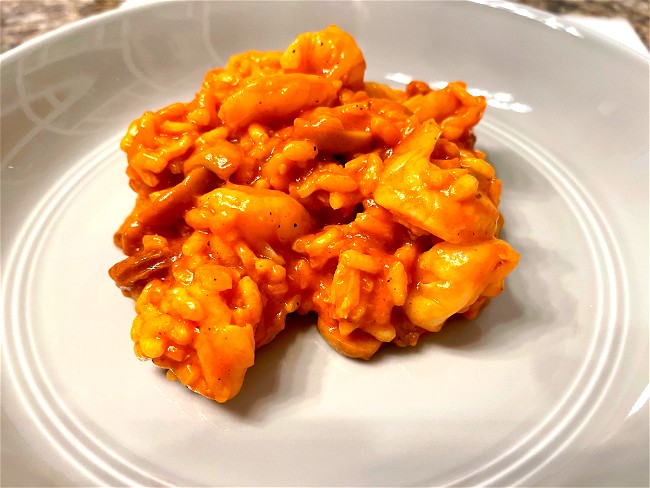 How to turn Breakfast Sausage into a Wheat and Egg Sensitivity /Allergy Friendly Fried Rice
Sep 07, 2021

My journey with Food Sensitivities and Intolerances.
Aug 31, 2021